My obsession with Fairy Hill Trail continues. To understand that, you need to know how it started.  I heard about this trail that is supposed to be down the valley from our place called the Fairy Hill Hiking Trail.  I ran there last summer but somehow missed the start point of the trail. I did find a Fairy Hill sign, I knew I was in the right area so I took off running through the grass in search of a trail.

A side trip bushwhacking down a fence line resulted in a few cuts, scratches and expletives but no trail. 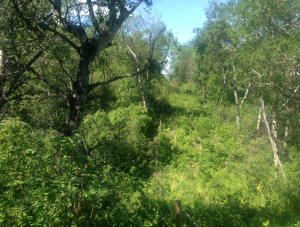 I did find the no longer used overgrown highway # 6 and while I didn’t know it at the time, I actually ran past the trail as I travelled down this old road. 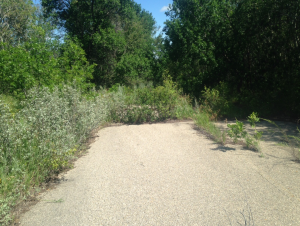 Which brings us to yesterday. I was off on another long run and ended up at Fairy Hill once again. This time, I was determined to find the trail. I checked a different corner of the property and low and behold, over the crest of a hill was this sign: 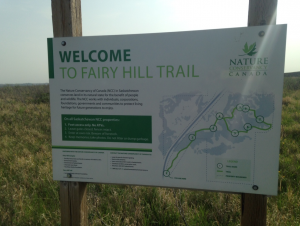 Success at last!  Off I went, happily exploring a new trail! About half of it was on deer trails in the bush with little flags marking the correct deer trail: 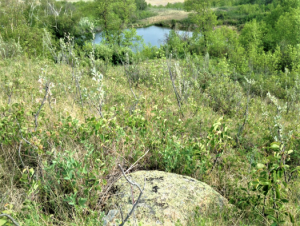 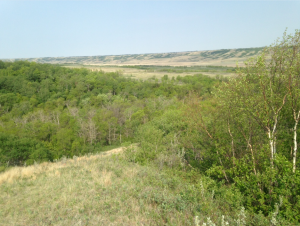 After climbing the big hill just past number 6 on the map, I was running towards 7 and then there were no trail markers. I kept going on a cattle trail that branched into three cattle trails but still no markers. I went back to the last marker and looked to both sides of the trail but no markers showing the trail had taken an abrupt turn. I went back on the cattle trails for a quarter of a mile, no markings. I circled left and then a circle right, no markings. I was sure if I kept following the cattle trails, I would eventually find the right trail again but here’s the deal. I had just run a long way and still had the same long way left to get back home. I was OK with running farther but I also had to be back in a certain time as we had to go into town. The time factor won out and I retraced my steps back to the trail head and then home.

Sure, Fairy Hill has won the first two rounds, but I will not be defeated!

I shall return, Fairy Hill.

You have not seen the last of me yet!

By: Russell Hodgins – On the Board for the Saskatchewan Trails Association 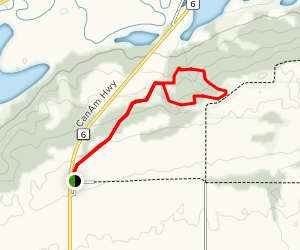 Want to join the discussion?
Feel free to contribute!

How To Find Trails In Saskatchewan!!!
Scroll to top