We have a friend in town from New Zealand, so I took him down to Grasslands East Block to spend a night in the badlands: 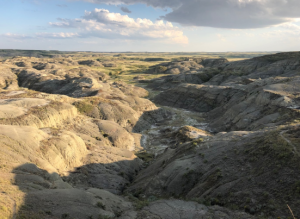 The Valley of 1000 Devils trail starts at the park visitor center in the East Block of Grasslands National Park and takes you into the badlands where backcountry camping is permitted. It was hot and dry with an extreme fire hazard when we backpacked into the hills, so we didn’t carry a stove and just ate a cold supper that night. In the 35-degree heat, hot food wasn’t a priority, just the scenery and that more than surpassed our expectations. The fluids we carried made up most of the weight in our packs and the park suggests each person carry 2-3 liters per day. They also point out that it can be 10 degrees hotter in this environment than other areas and it certainly lived up to it on our trip. The bonus is that when you are hiding from the sun in a patch of shade, you always have an amazing view. 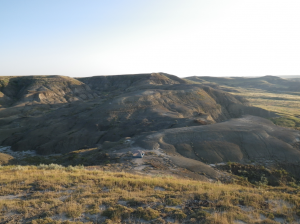 We chose the site for the tent based on the view higher up along with a steady cooling breeze. One of the difficulties in deciding where to camp was the amazing number of excellent places to put the tent. In colder weather, the tent could be set up lower down with more shelter and regardless of the wind direction, there was always a place that was out of the wind. 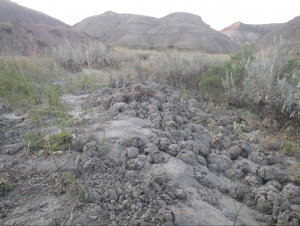 Deer tracks were everywhere but they were all bedded down out of the sun during the heat of the day. We hoped to catch some moving in the evening and morning hours but surprisingly, saw none. I think our experience is not the norm but again, that might be due to the heat and the deer waited until after dark to move. 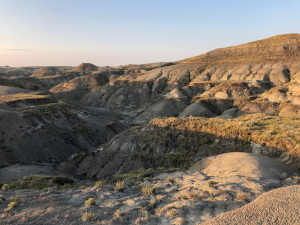 We kept finding round balls of clay at the base of hills and it appears that rain caused the mud to be washed down, forming them on the way down. We were told that this surface turns to grease when wet and from the looks of these clay balls, it probably sticks to everything. There was a brief lightning storm during the night but only a small amount of rain came with it so we didn’t get to experience 20 pound boots on the hike out.

Be prepared to do some climbing and while this area can be explored with a day hike, a night spent in the backcountry comes with a sunset, a sunrise and a star filled night.

Want to join the discussion?
Feel free to contribute!

Mans Best Friend on The Trails
Scroll to top